We were sad to hear of the death of Ursula Le Guin.

The Wizard of Earthsea was published in 1968 in the USA. Ursula Le Guin originally planned it as a stand alone novel, but went on to write The Tombs of Atuan and The Farthest Shore, creating a trilogy that has caught the imagination of readers of all ages ever since.

The renowned British critic, Naomi Lewis, said of The Wizard of Earthsea, “[It is not] the easiest book for casual browsing, but readers who take the step will find themselves in one of the most important works of fantasy of our time.” 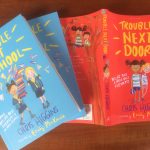